The neighborhood includes sidewalks, alleys accessing rear entry garages, garages with upstairs living quarters, and common park areas for residents to congregate.  Though Waylands Grant home sales were slow in the early stages, things eventually picked up and the last new home was sold in 2007.  Waylands Grant is close to Downtown Crozet, near Old Trail, and just a few minutes from the new Crozet Harris Teeter.

2009 prices show a relatively sharp decline – off almost 25% from 2008 prices and down significantly compared to overall Albemarle County home values.  While prices clearly show a drop, there are a few factors to take into account.

1. Small sample size to-date. There has been one single family home closed in Waylands Grant and one Under Contract. This small sample size sometimes makes it hard to draw firm conclusions of overall neighborhood values.

Let’s take a closer look at the second point…

Here are the two homes we’re talking about in 2009:

However, if we dig a little deeper into these single family home values, we’ll see that it actually isn’t quite as bad as it appears.  The average Waylands Grant home that sold between 2004 and 2008 was around 2775 square feet.  Since the2009 samplings are significantly larger, it’s like comparing apples to oranges.

Let’s take a look at a few ‘larger’ homes sold in Waylands Grant over the last few years:

The actual average per square foot price of these homes is about $118/sf.  While a drop from $118/sf to around $105/sf is a significant drop (about 11%), it’s about in line with what we’ve seen across Central Virginia.  It will be interesting to see if any homes around 2700 come on the market in Waylands Grant this year and what they sell for.

Yet, 2009 may be a different story.  With the town home and attached home market in Crozet slowing significantly, Waylands Grant hasn’t been immune to the slowdown.  In fact, since January of 2008, there have been 10 different attached homes in the neighborhood that have been listed and either were withdrawn or expired.  In that same time, only 2 have sold (one of which was a foreclosure) and 1 is currently under contract.

Until the market stabilizes and the amenities promised in Crozet (like the Crozet Library, the Downtown Crozet Streetscape Project, and the Jarmans Gap Road Expansion) actually start to get closer to coming to fruition, I expect that the attached home and town home market in Crozet will continue to suffer. 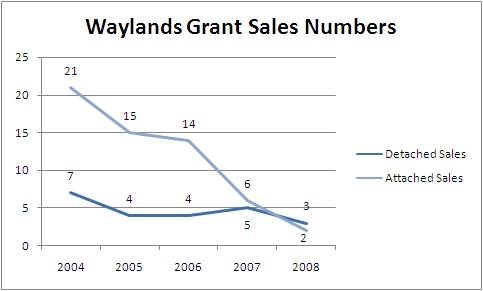 We’ll keep an eye on Waylands Grant real estate offerings and sales over the coming months.