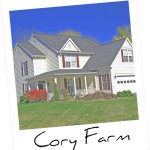 Established in 1997, Cory Farm is a 67 home neighborhood located in Crozet.  Cory Farm homes are 8 miles from the Blue Ridge Parkway and Skyline Drive, yet within walking distance to a variety of shops and restaurants including the Shoppes at Clover Lawn and the Crozet Harris Teeter.

As a relatively small subdivision, Cory Farm doesn’t have a large number of sales from year to year.  After the final new homes were completed and sold in 2004, there have been a total of 28 sales between 2005 and 2008…meaning that about 42% of the homes have ‘turned over’ in that 4 year span.  Considering the average homeowner moves every 7 years, Cory Farms is in line with normal turnover rates. 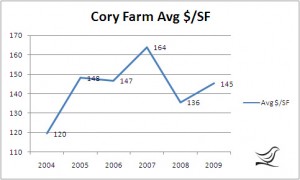 However, this price per square foot number may be a little misleading, considering the average size of homes sold in 2004 was 2605 sf and the average size of homes sold in 2007 was 2257 (a 13% difference).  Comparing apples to apples, the average per square foot of a home is almost always more for smaller homes since each additional square foot is typically less expensive to build/reproduce than the previous one.  For example, a similar 5000 sf home most likely does not cost twice as much as a 2500 sf home to produce.

Since 2007, prices have backed off to (approximately) 2005 pricing levels…and, not coincidentally, Albemarle County average home prices are also at about the same levels as 2005. 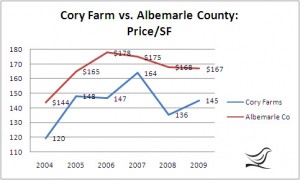 Through the first 8 months of 2009, there have only been 3 sales in Cory Farm.  While the neighborhood’s proximity to the new Harris Teeter may be appealing to some, it actually may be a bit too close.  Many homes that once looked over farmland now look directly at Harris Teeter.  In addition, the increased traffic on 250 (due in large part to Harris Teeter and Clover Lawn) may also be a detractor for Cory Farm.  Many people move to Crozet to get away from the traffic and congestion of 29N and the City of Charlottesville.  And with other Crozet neighborhoods still surrounded by more privacy, Cory Farm’s location may actually be hurting potential sales.

On the positive side, there has been a nice influx of new businesses and services coming into the Crozet area…making Crozet more and more ‘self-sufficient’.  These new businesses are increasing the popularity of Crozet because residents no longer need to drive to Charlottesville (or Waynesboro) for their daily needs.  Moving forward, I expect Cory Farm to continue to be a popular neighborhood mainly because a) it is easy to get to Charlottesville using I-64 and Route 250 b) it is built out and there is minimal construction going on (with the exception of neighboring Liberty Hall) and c) the community has desirable floor plans from several popular Charlottesville builders.