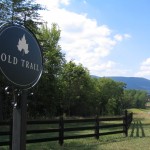 Let’s talk about town homes first.  When the development first started, town homes were the big seller.  The first few blocks of town homes sold out almost immediately.  After the initial rush during the boiling hot market of 2005 and 2006 (those numbers are so skewed and aren’t really worth analyzing), there were 8 attached home sales in 2007. But only 2 in 2008.

In 2008, there were a fair amount of town homes on the market.  However, as I write this, there is just 1 listed for sale.  The rental demand in Old Trail is extremely strong and has actually gotten stronger over the last several years.  Therefore, a lot of the town homes that were for sale are now in the rental pool.

A slowing town home market is not specific to just Old Trail.  Most town homes in areas outside a 10 mile radius of Charlottesville City (Crozet most notably) have seen a drastically slow town home market.  Here’s some stats to back that theory up:

From a development standpoint in Old Trail, there are (to my knowledge) no new town homes planned in the near future.  This will offer a much needed reprieve to the inventory levels of attached homes in Crozet.  With the slowing demand, this lower supply should absolutely help sellers.

The most glaring number for me is the drop in price per square foot from 07 to 08…a 12% drop.  It’s clear that the market slowed and sales prices definitely fell from 2007 to 2008.  Two interesting notes to point out:

1. Hauser Homes began building homes in the new Carriage Park section of Old Trail at a much lower price point than Ballard and Upper Ballard.  This had a direct affect on the lower price/SF

2. The most expensive home that has sold to date in Old Trail (6523 Woodbourne Ln) also had the highest price/SF at $273

I will put the big disclaimer out there that using price/SF in Old Trail as the ‘be all-end all’ factor in determining value is not a great idea…here’s why: there are several unique ‘neighborhoods‘ (Upper Ballard, Ballard Field, Carriage Park, Creekside) within Old Trail that have varying price points, sizes, and finishes.  So, to get a true take on the market, we’ll really need to look at the specific neighborhoods within Old Trail.  Email or call me if you want to get into specifics on that.

The other number that sticks out is the DOM increase from 125 in 2007 to 298 in 2008.  Higher price points are being (very) negatively affected in today’s market (see below for a few reasons why) and the increased DOM is just one result.

Don’t expect sales to jump in Old Trail in 2009 for several reasons.  First of all, there is not much new construction going on.  At press time, only three builders (Craig, Beights, and Medallion) are actively building ‘spec’ homes.  Because of market conditions, not too many homes will break ground on spec in 09.  However, there is a healthy (but not overwhelming) inventory of new and re-sale homes right now (14 total that could be moved into now or sometime in the next few months).

Here’s what concerns me for 2009 in Old Trail.  Of the 14 single family homes currently for sale, the average price is $752k and the median price is $715k. That is significantly higher than what sold in 2008.  In addition, these upper-middle price points have been most affected by the current housing and mortgage market.  There are 2 reasons for this:

While we are talking in ‘Twos’, the keys to success for Old Trail in 2009 and beyond are two-fold:

1. When will the amenities finally come to fruition? The shops and restaurants of the Village Center have been ‘coming’ for quite so time. However, it looks like they will be opening within the next several months.  I’m hearing late spring/early summer.  We’ll see.  The community pool is also under construction and is slated to be open this summer.  That will be a big draw to potential residents.  There are only a few neighborhoods in Crozet that have a community pool, so it’s a factor in some buyers’ minds.  There is also a Harris Teeter and some new shops coming to Crozet…which puts the area closer to self-sufficiency and should help all Crozet neighborhoods.

2. How will the market and Crozet do in 2009? I don’t think any of us know what is going to happen with the market in 2009 quite yet…so I’ll pass on this right now.  (I will say that I am a realist, but am also seeing some positive signs locally and in other areas.)  As for Crozet: there are some who think that Crozet is too far away from Downtown and doesn’t have enough services.  Two years ago, I agreed. But with the new Harris Teeter and some new shops coming, it’s getting closer to self-sufficiency and should help all Crozet neighborhoods.  The mountains, schools, and outdoor amenities always help (I think) keep the Crozet area popular.