Let me first throw out the disclaimer that we are desperately searching for good news in the Charlottesville area real estate market.  At Nest, we’ve earned the reputation of being honest: there’s no sugarcoating in our conversations with clients.  But we’d be lying if we weren’t using our magnifying glasses just a little to see if we can find a little (just a spec) of good news in the market.

October 2010 marked the 4th straight month that our sales in the Charlottesville MSA were  down.  The 9 straight months of month-over-month sales increases is in danger of being completely wiped out.  And sales in Oct 10 weren’t a little off as compared to Oct 09, they were WAY off.  October 2009 sales in the Charlottesville MSA (Charlottesville, Albemarle, Fluvanna, Louisa, Greene, and Nelson) totaled 192 sales.  That tally last month was just 137 – a drop of over 28%.  After 2 straight months of being just a few sales short, October proved to be the second worst month in the last year (July sales were off a whopping 36%).

While sales in the MSA dropped, inventory levels were seasonally higher than Oct 2009…but a tad lower than September 2010.  This is a similar trend to year’s past as sellers begin to pull their homes from the market because of the anticipated slower Fall market.  However, the drop in sales increased the inventory levels up to over 20 months.  This represents the highest since February 2010.  In fact, we can access real estate sales all the way back to 1990 and this is by far the highest October inventory levels we’ve had.

OK, so overall the market is suffering.  But homes in great locations should be selling…right?  Not exactly.  The Charlottesville City market has shown a few bright spots in the last year, but October 2010 sales were brutal: there were only 11.  Yes, 11 sales in the City in October 2010. 9 Single Family Homes. 1 Town Home. And 1 Condominium.  That’s it.  That’s a drop from 34 last October (about 67% lower).  Ouch.

Albemarle County fared much better, but still not great.  There were 54 total home sales in Albemarle…off from 69 last October (about 22% short).

So now what?  If you have a property you are trying to sell, make sure:

And even if you have all three. you might need to hold on tight for the next few months – there’s probably not going to be much happening.  But that’s actually normal.  November, December, and January are historically the 3 slowest months for real estate sales in our area. 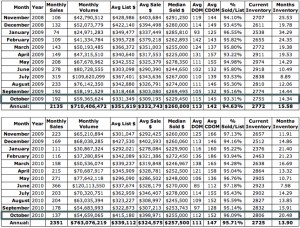 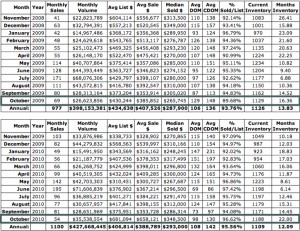 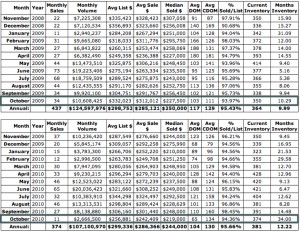