This is the first in a series of market reports looking at the sales and statistics for some of Crozet’s popular neighborhoods. 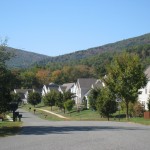 Grayrock (consisting of Grayrock and Grayrock North) is located in the western edge of Crozet, just off of Jarman’s Gap Road and minutes to Downtown Crozet and Interstate-64.  There were several builders who originally built in Grayrock, but most of the homes were built by Craig Builders and R.D Wade (with a few by Wendell Gibson of Gibson Homes).

Overall, Grayrock has been a successful development.  The first closings took place in the Spring of 2000 (original sale prices were around $200k) and the last new home sold in 2007.  Sales have been pretty consistent over the years…and, as you will see, prices have held up relatively well to date.

It’s amazing to look back at statistics during the frenzied years of 2003-2006 and marvel at the anomalies that those years were.  One of the most amazing Grayrock stats is that 45 (yes forty five) homes closed in Grayrock in 2005.  At an average sale price of $356,616, that’s over $16 million of transactions in Grayrock alone.   But that was the peak.  2007 and 2008 both turned out a respectable 12 sales in the neighborhood.  While 2008 was a tough year for real estate overall, Grayrock managed to close 12 re-sales (remember, no more new homes) with an average days on market (DOM) of just 71 days – well under the Albemarle County average of 113 DOM for 2008. 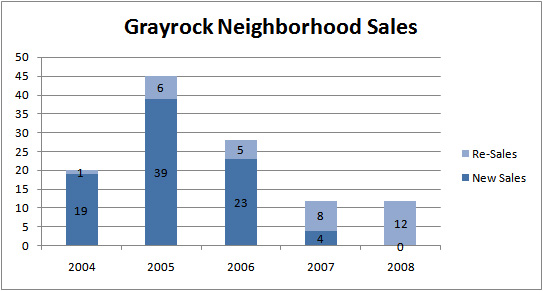 While sales did level off fairly dramatically (from 45 to 12 in 3 short years is a huge drop in volume), the fact that the neighborhood was completed and no new homes were being built had something to do with it. So, no matter how hot the market is, if a neighborhood is built-out and the new home offerings cease, there will absolutely be a drop in sales volume. 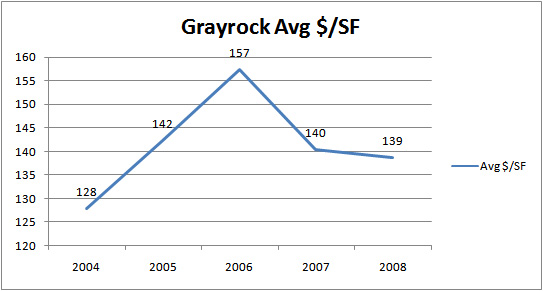 I dug deeper into the numbers to try to determine how and why there was such a small drop in price/sf from 2007 to 2008. I’ll admit, I was a bit surprised by this miniscule drop.  I took at a look at average home size and a variety of other factors and the only reason I could come up with was that Grayrock values may have corrected faster from 2006 to 2007 than other areas and buyers saw some value in the 2008 Grayrock real estate prices…which could prove the fact that 12 homes sold with an average DOM of 40% less than the County average.

Overall, take a look at this chart to see the Grayrock correction in price/sf as compared to other Albemarle County homes: 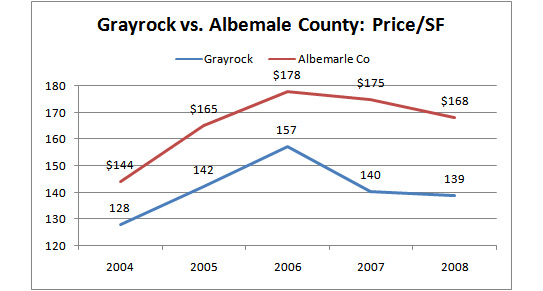 So, what does that teach us about the 2009 market?  My take is that is means that the faster prices come down, the faster things will sell and the faster we will recover.  Look at some spots in DC – prices have gotten hammered over the last 24 months, but now some office are reporting record sales in late 2008 and early 2009.  Unfortunately, the market cannot correct without sales.  So, until we start to have some major price reductions and get some more closings under our belt in Central Virginia, we may continue to be stagnant.

But back to Grayrock.  The current state of the market is a bit less clear.  According to the Charlottesville MLS: as of the weekend of March 7, there were 4 homes for sale in Grayrock and 1 home under contract.  However, the average $/SF of list prices is right at $145/SF.  That’s 4% higher than the 2008 average per square foot sold price.  Since prices have absolutely backed off of 2008 levels, I’d say that these list prices (and, consequently, the sale prices) will probably come down, at least slightly, as the year progresses.

Here’s another reason prices are probably going to come down a bit.  Grayrock has historically had a high concentration of sales in the summers.  With just 4 homes on the market now, I anticipate more properties being listed within the next few months.  Surely (famous last words), these new listings will not be priced higher than the current offerings.  In order to stay competitive, they will most likely be priced at or below current list prices.

To date, Grayrock has done a pretty good job of holding its value.  Luckily for its residents, foreclosures have not had a major negative impact on home values.  There was one Grayrock foreclosure that sold in 2008 at $139/sf – the exact average for the community.

I think that values (so far) have been maintained because the community offers great Blue Ridge mountain views, is a well-maintained community, and because of the amenities like the Crozet Harris Teeter and the Old Trail Village Center that are opening soon.  The Crozet Downtown Streetscape Project and the Crozet Library are two other longer-term projects that will only help with Grayrock homes and sales in other Crozet neighborhoods. The community continues to be a popular Crozet real estate option and considering the overall market conditions, Grayrock has maintained values relatively well.

(I’d appreciate any feedback/suggestions regarding the format and information of this market report.  These market reports will be an ongoing component of The Nest Report and I want to offer information and statistics that are relevant and useful.)